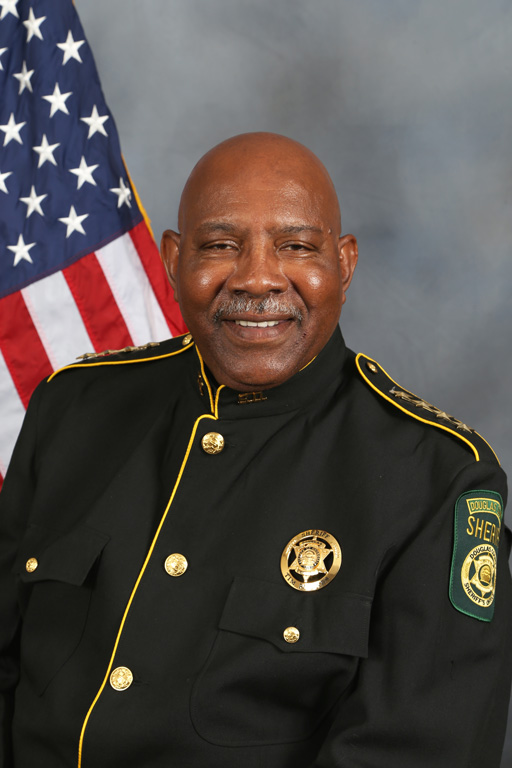 As the Sheriff of Douglas County, I want to welcome you to our website and thank you for your interest in the Douglas County Sheriff’s Office. I was born and raised in the Post and Ephesus Church Road area of Winston in Douglas County. I’m a 64-year-old father of seven and grandfather of nine. My wife, Joy, and I are members of Crossroads for Life Ministries Church in Douglasville, where I am the director over the Vision 21 program.

I retired from the Douglas County Sheriff’s Office after serving 38 years with the department. During the time I worked under three different Sheriffs and in almost every facet the Sheriff’s Office has to offer. I worked my way up through the ranks from Patrol, onto Investigations, and then Warrants. During my time on patrol, I supervised a shift as a Sergeant I then received a promotion as a Patrol Lieutenant. As a Lieutenant under former Sheriff Earl D. Lee, I was a member of his Command Staff for over 10 years.

I then moved to an open Sergeant’s position in the Warrant Division.

I served two years on the Georgia Bureau of Investigations Elite Metro Fugitive Squad where I tracked down and apprehended some of the worst criminals society had to offer. I was promoted to Lieutenant and supervised the Warrant Division for about nine years.

In late 2008, under Sheriff Phil Miller, he appointed me to the rank of Captain because of my leadership abilities, experience and vast knowledge. He entrusted me as a member of his command staff as a Division Commander.

As a Division Commander, I was over five divisions which included the management of thirty-two employees within the Warrant, Civil, Transports, Fugitive, and Central Records Departments. This appointment also included managing three lieutenants, three sergeants, and the entire division budget for the next seven years before I retired in December 2015 to run for the next Sheriff of Douglas County, Georgia. In addition to my many years of supervision, management, and command staff experience within the Douglas County Sheriff’s Office, I also have over 500 hours of training hours on supervision, management, and budgeting.

Shortly after taking office in January 2017, we adopted a new motto here at the Sheriff’s Office: Progress is impossible without change. Since becoming your Sheriff, I have implemented numerous changes within my office to better serve our community. I created the SCOPE Division which stands for the Sheriff’s Community Outreach Programs and Education. Their purpose is to foster better relations between our office/ law Enforcement and the community that we serve. We are doing this through outreach programs and educational projects such as our ice cream truck, the Polar Patrol. I also created a specialized patrol element called the Scorpion Unit. These deputies are seasoned officers who patrol high risk areas and are proactively engaged in reducing crime.

We will continue to work hard and press forward in our endeavor to make Douglas County a great place for us to live and raise our families. Thank You again for your support.

I carry a strong belief in enforcing the laws equally, fairly, and impartially to everyone.

Law enforcement must become more involved within their local communities. We have to get out and interact with people and their children so that we make personal connections. The community has to see that these men and women are truly there to serve and protect them. This will be accomplished by making the officers get out of their cars and make positive contacts with members of our community. For example at community events like youth football games, baseball games, school field days, fall festivals, and many, many more events throughout the county. Ask yourself, when is the last time you were at a function like this and a Douglas County Deputy came walking through introducing him/herself, shaking hands, and making you feel safe and secure that a responsible and caring deputy is nearby?

I will work with other Douglasville City and Douglas County leaders to have the Sheriff’s Office become involved with existing youth programs as well as to develop new ones based on current trends.

I will continue the Sheriff’s Office Citizen’s Law Enforcement Academy (C.L.E.A.), and work to expand it so that more citizens can be involved. For those of you that don’t know what C.L.E.A. is, it is designed to increase citizen’s understanding of law enforcement through training and education. It helps give the citizen an insight into the duties and responsibilities of our deputies, and gives greater awareness and appreciation of the challenges and decisions deputies are confronted with every day.

We must require more training and education of our officers. The Georgia P.O.S.T. Council regulates a law enforcement officer’s certification. They only require 20 training hours a year for the officers to maintain their certification. Budget allowing, I would like to double that minimum requirement within our agency, meaning that the officers will be required to get a minimum of 40 hours a year. This would include specialized classes such as cultural diversity and the different views and beliefs of the current movements. This will allow the officers to have a better understanding of how some of their actions are being perceived by different members of the community.

People want more transparency within law enforcement. Having more transparency in law enforcement is very important to our ongoing national issues. It isn’t always that we don’t want to let you know what it is happening as quickly as possible, it is often impossible in order to protect the integrity of the investigation. If it is a major incident that occurs in Douglas County and involves one of our officers, we aren’t going to be the law enforcement agency criminally investigating it anyway. As I stated before in other posts, an investigation often takes months to gather all the facts, examine them, and determine if a crime was committed. During that time emotions run high and it is often perceived that something is being covered up. But I personally vow to keep the citizens abreast of major situations the best that I can, while protecting the integrity of the investigation.

I will select a command staff from people who have years of experience in Douglas County law enforcement and who all share my belief in impartial law enforcement and the proper application of the law . We will constantly review all use of force incidents as well as examine each patrol officer’s daily interactions with the public to assure that we have good officers working for YOU that are respectful and who are enforcing the laws equally and fairly to everyone.

By implementing the aforementioned programs, education, training, mentoring, and policies I believe that we can begin the community transformation and healing that I envision.