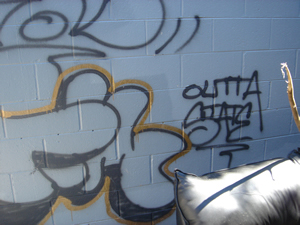 In order to solve the problem that gangs are causing in the lives of our young and in our communities around the county, we all have to pull together and attack this problem head on. Click on the links below to read more information.

What is a Gang?

As a parent or community member have you ever stopped to think what a gang is to you? Depending on where you are from, you may know first hand what a gang is, or you may have some preconceived thoughts on what a gang might be. When most of us think of gangs, we probably think of outlaw motorcycle gangs, white supremacy groups, or even street level “thugs” that we have seen on television. So, what is a gang? Sometimes it pays to listen to the kids. In simple words…A gang is a group of people that distinguish themselves as a group and then commit crimes.

Most states and the federal government alike all have similar laws when it comes to gangs and gang related activity. In those laws, there is usually a strict definition of what a gang is. I would recommend that you check your local laws to better familiarize yourself with your state’s gang laws. In Georgia, the specific law for gangs is called the Georgia Street Gang and Terrorism Prevention Act. The intent of Georgia law is to combat the increasing problem related to criminal street gangs. The law was created to help identify and prosecute those that are involved in the criminal acts often associated to gangs.

Georgia law also gives a legal definition of what a gang is. Georgia code section 16-15-3 defines a gang as: A group of three or more people; associated together in some recognizable way; that engages in one act of gang related criminal activity.

The key things to understanding the law are that:

Here are some of warning signs or indicators that someone might be involved in gang related activities:

Indicators that there are gang related activities in your area:

Most gangs choose a name for themselves that may show an allegiance to a specific geographical area or relay a common belief system. Some choose to call themselves a music group, clique, or squad to avoid the stigma and attention of being called a gang.

Most gang names are abbreviated into three or four letter combinations. Some of those abbreviations can be the same as other well known organizations to disguise the gang name and confuse others.

The following is a list of gangs known to have had some type involvement in Douglas County, Georgia. Some of those gangs are nationally known (traditional gangs) and some are local gangs (non traditional) and may be specific just to this particular area. The information about each gang’s involvement is from intelligence gained from officers, teachers, and members of the public. Some are confirmed gangs while information on others is limited.

Gangs often decide on a common color that shows allegiance to a larger nationally known gang. Some gangs may chose two or three colors, and to some gangs, colors mean very little.

It is often very difficult to distinguish gang related clothing from current style. Watch for members to wear the same colors all the time or at specific times when trouble occurs. Watch for groups of members that are all wearing the same color. Familiarize yourself with current gang clothing trends from internet sites or call law enforcement.

Most gangs use hand signs as a common form of communication. Often gang hand signs form numbers or letters to identify the group’s name. Hand signs of one gang are very offensive to another, and may incite tension and fights between the groups.

Gang members often will tattoo, burn, or cut their gang name or logo onto their body. In some instances non-permanent ink markers are used instead of permanent markings.

Gangs will mark their area of operation with graffiti which lets other rival gangs know who controls that area as well as to intimidate local citizens.